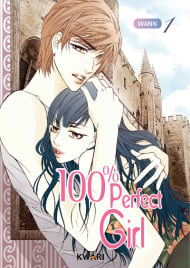 He’s the ruler of the country of Roinne; she’s a typical Korean teen, and his 100% perfect girl. For the rich and powerful Jarte, he wants nothing more than to take this girl, Jay, for his own, and together the two begin a tentative, tender relationship. However, Jay and Jarte’s lives will be nothing but simple, as insecurities, assassins and rivals in love stand in the way! Will the two manage to stay happy together?

Honestly, I hate this manwha so much. It just about covers everything I hate in a series - the whole 'love at first sight' cliche, great character development being completely undone for no valid reason, 'perfect' characters, and a dozen other things that I can't mention because I don't want to give you too many spoilers. What pisses me off even more though, is that despite all of that it's actually a good series. If it was a bad series, there is no way I would have felt so compelled to finish it, nor would I have cared what happened to the characters, and I certainly wouldn't be quite so angry at it.  So the story - the perfect ruler of the perfect country falls head over heels for a normal Korean teen (you know, as you do) They begin a complicated relationship, with seemingly nothing going right. It takes quite a few very dark turns, to the point where you wonder how either of them are still sane (I mean, they're probably not, but that's besides the point) I don't want to spoil too much, but you can expect a lot of drama. A lot of drama. The main character, Jay, is about as ordinary as they come. She wants to be an artist, but her mum pretty much refuses to let her. Other than that, she is a very stereotypical shoujo heroine. She actually gets some really interesting character development at certain points, but I think the author kept forgetting that and reverting her. And then there's the perfect prince, who is really lucky he's fictional, because otherwise I would have killed him by now. At first I didn't like him because he seemed to perfect, and any character development he got only served to make me hate him more and more. Of course, there are other characters, all of which annoyed me to various degrees, but they're all fairly interesting to read about. Artwise, it's basically normal shoujo style, except the lips are goddamn huge and I genuinely couldn't tell three of the characters apart. So, not too great then. If you like drama, then dear god will you love this series. Especially if you love dark drama - seriously, all those abuse tags are there for a reason. If you're not a fan of drama, stay the hell away.

Honestly at the beginning it was alright, the middle fucked me up and it had me pissed for a while but the ending was nice and cute . This manga is just like an emotional roller coaster but it was kinda enjoyable

Aside from being the first manga I ever opened, it's also the absolute standout.Firstly, the art is positively gorgeous. Wann obviously places a lot of heart into the detail and complexity of the characters and surroundings. This ensures that regions are distinct and the setting is strongly woven to hold the impending action. It all beautifully underlines the delicately torturous emotions that feature as the driving undercurrent to the story. If anyone has even felt a fraction of the trials of complex relationships and the journeys they can take, - granted, we're not all whisked away by royalty into a dangerous world of sumptuous living and people with ulterior motives - but in any case I think that this has a lot to offer anyone with an inkling to explore an intense emotional path with a generally excellently-executed plot and dialogue. It's something of a non-stop ride. There is just enough breathing space between events to keep the reader turning the pages raptly without the consistent dramatic elements 'breaking the camel's back' so to speak. I devoured this series very quickly, and I felt so wonderfully 'full' at the end - it was like a perfectly balanced dish of the sweetest and most delicately poised torment pages can hold.I think it'll take something special to knock this off top-spot in my favourites.  I'm curious to see what others have thought of this 11-volume rollercoaster, but it's something that I think I will look forward to re-reading sometime in future. 9.5/10 - a strong one at that