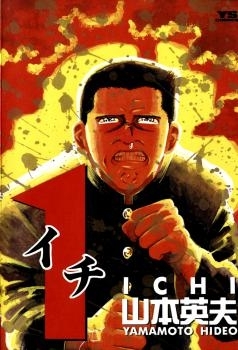 I would say that the most interesting quality of this manga is the sense of offness about having a crybaby fighter. It sorta reminded me of how Vash from Trigun's hook was that fe was a pacifist gunslinger (though obviously this manga veers far more into the psychopathic direction towards the end). And I suppose I appreciate how this manga is definitely not making the fighters look cool as a lot of fighting manga are wont to do (or at least the fighters didn't come across as cool to me). That said, I think this manga is still subtly glorifying a hyperviolent form of masculinity--like in the way all the female characters we see are drawn to the hyperviolent men or the way that bullying is treated as kinda being the fault of those being bullied for not properly fighting back. And this isn't ideal since it could contribute to readers having a skewed view of what it means to be a man (especially if they consume a lot of stories that portray masculinity in that sort of way).

The artwork isn't very good, especially when compared to the average manga from today. Perhaps I shouldn't be comparing it to artwork from today, but I don't think I could be honest with my rating if I didn't do so at least on some level.

Ichi the Killer holds a special place in my heart for being perhaps the first seinen or 'adult' manga that I remember reading and enjoying for its outlandish characters; over-the-top violence; and exploration of extreme sadomasochism. Such was my teenage enthusiasm that I bought the live-action movie directed by Miike Takeshi which is shoddy in the strict definition of adaptation but is still rather entertaining if you're into surreal black comedy. At the time however I was still 'shonen' and so probably too immature to fully appreciate this work, the only other manga I'd encountered being volumes of Dragon Ball in my school library. Years later I thus re-read Ichi the Killer and found that - while enjoyable - it suffered from a meandering storyline confused in what it was ultimately trying to say. In comparison this prequel '1' is much like its title: with a shorter, simpler storyline that lacks the interesting characters or setting of its predecessor. Other for the odd fight scene it holds little to no value and I would recommend reading the original or watching the movie instead.