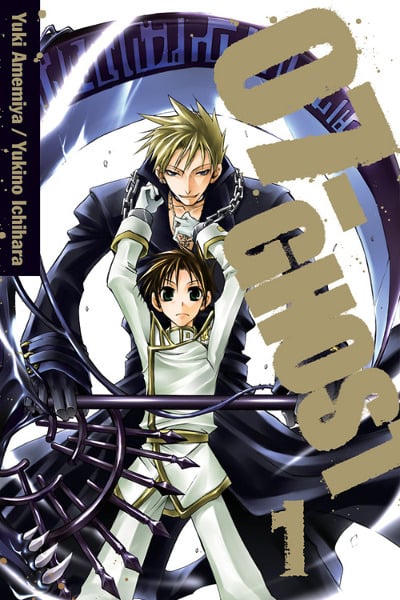 pandora hearts are simular in the way that where they go on a mental journey. they both have a power where they didn't know before. i wont say much more or else i would give it away but i highly recommend pandora hearts.

Both of these Manga have heavy magical themes that affect the plot and characters. Each story has a mysterious all-powerful bad guy, as well as characters having a split personality that they themselves aren't aware of.  Both of the main protagonists are young men and are watched/guarded by older male characters.

Overall both 07-Ghost and Pandora Hearts have similar plot and setting devices they are just exucated in very different ways.

A lone mercenary traveling in a foreign land is forced to participate in a street brawl, fighting back-to-back with a gun-toting man wearing a pelt around his shoulders. When they emerge from the attack unscathed, the man orders him to become his bodyguard. Only then does the mercenary-turned-bodyguard learn a surprising fact - this spirited fighter is the King; and between near-daily assassination attempts and His Majesty's obvious disdain for him, his life at the palace is not an easy one. But eventually, the bodyguard begins to realize that there is a reason behind the King's arrogant demeanour - one which he becomes determined to find out. Still... how can he protect a man who doesn't want to be protected?

Both series feature someone who's life is in constant danger, and their very close relationship with the person who protects them. While the characters themselves are fairly different, the nature of their relationship in both are almost identical, so if you liked one I think you'd like the other.

William Twining lives a charmed and privileged life. As a rich nobleman from a prestigious house, he trusts his superior intellect and strictly-scientific mind will help him sail through school with ease - but what he didn’t anticipate was returning home to discover his family went broke and moved out, leaving him penniless! Desperate to find something left of value, he finds a secret room in the basement, accidentally summoning Dantalion, Grand Duke of the 36 Armies of Hell in the process! All William wants is to be left alone to his studies, but he’s now tasked with deciding who the next ruler of Hell will be, much to his annoyance. With Dantalion and other demons eager to influence his choice by whatever means necessary, what’s a nobleman to do?

If you like 07-Ghost or Devils and Realist, then you will definitely love the other!! I'm not sure how to explain it, but both series definitely have similar vibes to each other. Definitely recommended if you love the aspects of magic, gods, angels, military, and new found family.

After losing his memories in a traffic accident three years ago, Haru is now living with Kiriyuu, his saviour and legal guardian. But after a school trip where he and his friends wander in an ancient lab, Haru discovers that there might be more to his lost memories than he thought.

Siscon. Power-phobia. Son of the great General Luccafort. Son of a general. Wether-crown. Fourth-in-line for succession. The titles, accolades, expectations, respect, and envy for DX Luccafort keeps coming. But all he wanted to do was win Marion's hand. Landreaall follows DX, his sister Ion, and his bodyguard/brother Rokkou as they leave their home in the countryside and brace themselves to take on whatever their famous last name brings them.

The story is set in a world years after a young adventurer vanquished the dark lord Diabolos and brought peace to the land. With Diabolos' resurrection, the boy sets out to defeat him again, but has not returned. Now his friend and fellow adventurer Kai sets out to find him and see if what he said is true. Journeying with Kai is Izayoi, a mysterious boy who can communicate with demons, and Jend, a dark elf seeking vengeance against Diabolos for the extinction of his race.

The night of his coming-of-age ceremony, Mihara Kouki lost his memory. The one thing he remembers is the moment "someone pushed him". Relying on this tiny memory, Kouki will face his past self while pursuing his own relationships (with other people) — as he chases the criminal, he yearns for these relationships(to create bonds with others)! He enters a human drama where he reels in the thread of memory!

Marimo and Rin are very young sisters. Who are the two continuing to fight and what are they escaping from? That secret happened several years earlier, and its origin was an explosion at a certain factory. A mysterious virus hit a district, and the two have obtained strange powers: the power to wound and kill a person with just a touch and the power to calm a person's heart by touching. Hand in hand, the sisters continue their escape in order to fulfill their promise to their mother, going towards a certain place, however...

Yonekura Mugiko, senior in high school, is a talented exorcist dedicated to her work. One day, she was accidentally pushed and fell down a flight of stairs, resulting in amnesia! She only remembers things up till spring of her 6th grade year, hence: she has the mentality of a grade school kid… and forgets about her boyfriend, Kakurazaka Hikaru, a well-known exorcist as well. Mugiko and Kakurazaka will work together to exorcise spirits whenever they are hired, despite the little accident. Meanwhile though, Kakurazaka, known for being a perverted hothead, will try to regain Mugiko’s memory back… to be romantic with her once more!!

16 year-old Mishima Haruhi rescued a guy drowning in Yokohama Harbor, who has no memory of who he is or how he got there. Even more mysteriously, he seems to have extremely special powers including the ability to heal others. The only clue they have to his past is a bracelet he is wearing with the number "33" inscribed, but it is not long before people threatening to take his life force them to dig deeper...