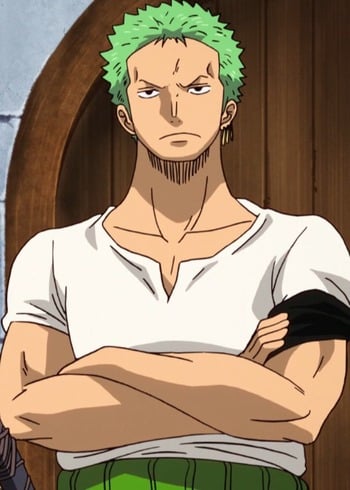 Before joining Luffy, Zoro was known and feared worldwide as a notorious pirate hunter. He is renowned for fighting with three swords – one in each hand and one in his mouth. Zoro’s extraordinarily powerful three-sword style of fighting mixed with his sheer will and determination to become the greatest swordsman in the world make him a formidable foe. Though he spends a lot of time sleeping, and is near on impossible to wake, he is always raring to go when there’s a fight to be won, especially if it’s against another swordsman. But a word of advice: never let Zoro lead the way, as his abysmal sense of direction allows him to get lost even when following a straight path!

If you don't like Zoro, I wouldn't absolutely refuse to feed you if you showed up at my door starving, or anything like that... but I probably wouldn't offer you seconds, or dessert.

this might be a little irrelevant but his chances of getting a girl are the same as luffy's.

I don't dislike him, and at first I did like him, but years later when I think about it, there isn't much for me to like him for. All people keep saying for the reasons why they like him, like on here for example, is because he is very strong and the very overused word "badass"... that's it. Oh wait, there's also the usual fangirls. Definitely doesn't help make it convincing. There's not much else to like him for as a character (yes he's also very loyal, but so are so many other characters in One Piece), so I find him meh. His past doesn't even help much since out of all the Straw Hats, his is honestly the most lacking.