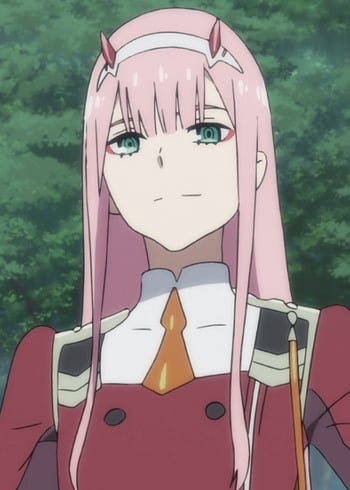 Ok, so I hear complains about people complaining that other people call her overrated.

Wanna know the actual truth? She fucking damn well is.

There are so many overrated Anime girls, and she's, unfortunately, one of them. Why? Simple. She has literally nothing special.

There's seriously nothing special about her character, except her horns and eyes, but I'm talking about personality here.

002 is a well-written character, not going to lie about it, but you need to accept the fact that she's not written in a special way. Sure, she has some very nice waifu character traits and she's very kawaii and all, but the fact that she is called, according to the Anime fandom, ''dino girl'' doesn't make her neither interesting nor special.

Indeed, she's confident, proud, risky, strong, passionate and can be very lovable, but HOW MANY ANIME GIRLS have we seen like this? Exactly, many.

002 is not boring in the Anime. In fact, she's that kind of girl to boost your confidence and take away your boredom if you meet her in real life. But we are watching a screen, and this kind of personality has been seen SO MANY TIMES that MANY PEOPLE got bored of it, to the point that it makes them uninteresting. She actually has one trait that isn't very seen and used in Anime girls and it makes me like her, the ''I don't need to be rescued or protected'' trait. We LOVE that in an Anime girl because we got bored of the weak girls, indeed. But still, IT DOES NOT make her interesting.

Her fandom really needs to face the facts, although some already have and good job on that, the rest of you NEED TO STOP!

I don't even understand why call her waifu material in the first place? She's kind of bipolar, abusive, manipulative (you can't see her manipulative side if you can't study someone's psychology at least a little bit) and sometimes toxic. I am not going to blame her, she's gone through abuse as a kid, but it doesn't justify her actions neither makes her a waifu material! Even Asuna from Sword Art Online is much more of a waifu than her.

Maybe you still haven't understood the ''overrated'' part, so let me give you an example.

Let's take 002, and compare her popularity to Yuno, from Futue

Overrated? Very much so.
Somewhat cringey? I guess.
Bypolar? You're talking about 2D women for fuCc's sake, I doubt you even know what that word means ye slack cUnt.

Does that stop her from being an amazing character? Of course not.

This character had so much potential, but a lot of it was wasted thanks to the writers' obsession with sexualizing her. This entire show was flat, really. Like we haven't seen this before?

I just finished watching darling in the franxx earlier and the last episode made me cried so hard. I'm going to miss squad 13, Nana/Hachi, Dr Franxx and of course Zero Two herself.

Zero Two is now behind Gyro from jojo sbr in my all time fav characters list ^.^