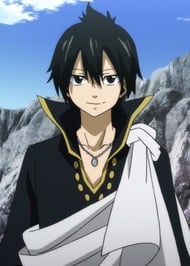 This man is too sexy.

i found him sooo hot

Is it just me or does Zeref look like Grey Fullbuster

Quite a disappointment as an antagonist.

So much was built around him. His backstory was not bad either. Quite one of the better things about Fairy Tail.

However, in the end nothing was made of it and the fight against him was totally destroyed. Ultimately, the much-hyped antagonist became just another joke.

He reminded me of one of my favorite anime characters Itachi so naturally I took a liken to him.