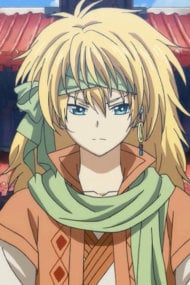 He has a pure soul and is an angel. I love my sunshine so much ♡ he deserves the world and everything. His backstory has broken my heart and made me cry so much. His fate is tragic and yet he can smile after so much suffering and pain. He is my comfort character ♡

Ova made me wheep.He is such a good support character.

His fate of being the yellow dragons is so much worse than death.The anime and manga alike really drill it into you, you cannot not feel the dream and despair he experienced before he met the rest of the Happy Hungry Bunch.It's terrifying, watching everyone you love die and not being able to move on yourself, knowing everyone you care for will age and die and you can never be with them.Living a life with on end that renders existance meaningless.That is thankfully until he realizes that he will have a new place to call home in the people comprising his "Happy Hungry Bunch".I am so glad that he can keep an appetite and laugh and cuddle and feel like a human being again alongside his friends.

Also big yes to the fact that every time he gets severly injured or tries to his friends get in his way or won't just let him do it willy nilly.They understand that even though he won't die he will suffer and he has suffer enough for millenia already and I appreciate that.

at first, I'm really confused if he's the real one since he didn't have that reaction

but after the OVAs...

Didnt watch the whole ova but i got the gists of it i feel awful for hi everyone else past away all of the othet dragons and their red haired master but since he was immortal he didnt i feel so bad then he met tht girl and.....i love him precious baby needs a protection squad....also love how strong he is

I don't think I have ever cried so much over a single episode (the ova) You can't do this to me;^; Love him sm!