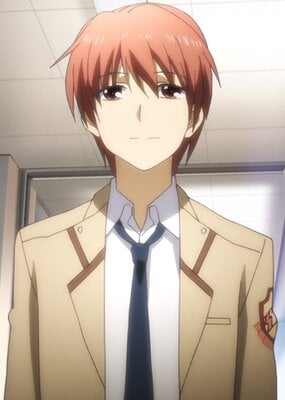 Unlike the other members of the SSS, Otonashi enters life-after-death without memories of his past, how he died, or even his full name. Even without a sense of self, Otonashi is a caring person who would sacrifice his own happiness for that of another.

Though Yuri and the others are dead-set against Tenshi, Otonashi is intrigued about her and the role that she plays in their world.

not exactly the funnest or most intriguing character on earth, in fact he's quite plain, but he's the only one the author seemed to put actual effort into. he's the only character whose development, depth, realism, etc matter for more than like five minutes in the story. meanwhile, there are characters like yuri, yui, and naoi who get development in small spikes and are then played for feels and immediately forgotten. that's unrealistic and badly developed. so at least otonashi was a proper character.

I like him, he's a realistic, well-written, and well-developed character.

The best character in whole anime, most realistic and relatable. He's propably my anime spirib brother or smg

Episode 9 made me cry.

am I really seeing people calling him bland? in my opinion, yuzuru is the kindest soul. I believe he's the best of MCs. 0 flaws. Self-sacrifice, personality, development. The one character I never hated one bit. Yuzur and Kanade, boy oh boy I fucking love you both.