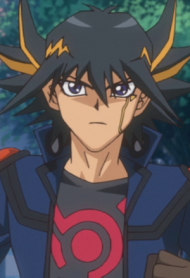 I haven't seen anything past 5Ds (yet) but of the 3 MC's of Yugioh thus far; I gotta say Yusei is by far the worst. He's so bland and one-note that it doesn't feel like he has a real personality. Yugi and Jaden for example had quirks, flaws and humor that made them feel like real people, that also grew and changed along the way. They gradually grew up and it got me invested and attached to them both. Yusei didn't have that, he looked and felt like an unrealistic stoic comic book hero - and it was so incredibly boring. He could've been a good side character, or even main rival, but honestly Jack, Akiza, or even Leo/Luo would've made for better MC's than him.

Yusei to me is the ideal hero.

He's a great duelist but personality wise he's extremely dull and uninteresting. I wish Jack or Akiza were the MC of 5ds instead of Yusei.