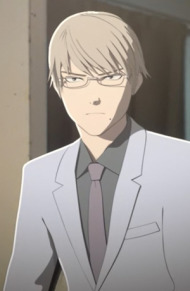 At first he looks like a basic selfish bastard who does bad things because he wants money, but later on you see why he is doing these despicable things - you see the cause of his actions - This isn't an excuse for his shitty behaviour but atleast you got to see the different side of him, which makes him more than an one-dimensional character and you actually low-key try to empathize with him. Not to spoil you but both in season 2 and later on in the manga you'll see softer/better side of him. I also want to mention his relationship with Izumi Shimomura, yes - he uses her as his bodyguard, isn't afraid to threathen her if she fails to do her job, and can be harsh overall, but at the same time he treats her like a human being if it sounds right? What I mean is that despite his cold attitude towards her, he treats her with respect - he never calls her bad names, never raised a hand against her no matter how angry he was, he gave her a new life, and *SEASON 2 SPOILER* he was even defending her from Satou in the last episode of S2, I think little things like these makes him a redeemable character (I could also write a whole paragraph about his development in the manga, but I don't wanna spoil it so just go read the manga yourself);

Overall, I think Tosaki is a complex character, that is what makes him an interesting character and that is why I sympathize with him.

I want to have his babies.

It boggles my mind how Izumi can still protect this fucking douchebag.

love how this anime changed the point of view and suddenly from a hard working guy who's after money, you see someone who does it all for someone he loves more than world.  Got to admire him for that.