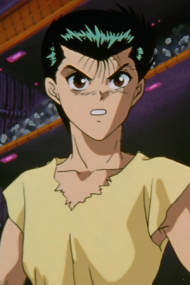 He reminds me SO MUCH of Josuke Higashikata. Actually now that I think about it basically all the characters from yu yu hakusho have Diu "counterparts"

No one has bigger balls than him.

Love this guy, total badass. Always felt they shouldve done a sequel. To showcase him 50-100 years in the future as hybrid demon king. If not a king at least have him resemble some of the power his demon dad displayed, and that weird yellow power he had going for him at the end of the tournament. Yusuke deserves more in his arsenal than just is total badass spirt/demon gun. Dude was one of my favorite characthers. Oh!!! and they should've totaly let him see one his desendents. Man that would've been great. lolol

One of the most badass anime characters of all time.