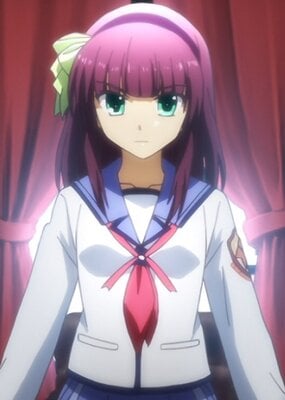 As the cheerful and determined leader of the SSS, Yuri directs her teammates through daily missions in their fight against Tenshi and a fate worse than death. Always on the lookout for new recruits, Yuri is fully dedicated to her group and is fiercely protective of those she cares about.

(SPOILERS!) i've got mixed feelings on yuri. i thought her role in the narrative was really interesting because she was a hero and a villain at the same time; she was always helping the main characters thrive in any way she could, but simultaneously, she's the whole reason the conflict with kanade even started. her backstory had the potential to realistically implement many traits into her psychology, and to an extent, that's what it did. i also kinda have a soft spot for her because we're both 3s haha.

HOWEVER, all of that was rendered mostly obsolete because yuri got a massive lack of screen-time. we hear her backstory in episode two, and it's barely touched upon by the writers again. wasted potential imo. i should also add that her design is an obvious knockoff of haruhi suzumiya, which isn't really creative. i don't get the impression they were paying homage to her by doing this either, but maybe i'm misinterpreting that. if kyoani were the company that animated angel beats, maybe i'd view that differently.

regardless, overall, i do think yuri is the most complex character in the anime. so i'm not sure what i think of her. tbh angel beats wasn't that good lmao. it's sad that she's probably the best character when she's average at best imo. and just like the others, she's only there to make you cry. cheap device.

The most well-written female character of the franchise.

I also agree with HitlersArtTeacher. Also, yeah, she's basically Haruhi Suzumiya but not insufferable and instead actually likeable. A shame how her characterization was executed, tho.

Haruhi Suzumiya but a nicer version/hj