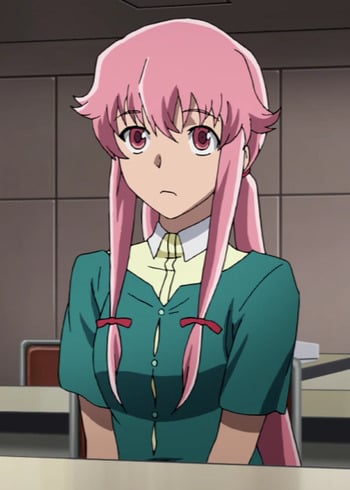 The talented and beautiful Yuno Gasai is the poster child of a model student but, beneath this mask of perfection, lies a stalker obsessed with Yukiteru Amano. Known as Second among the players of Deus Ex Machina's survival game, she holds a special diary that tells her the actions of her beloved Yukiteru in ten-minute intervals. Her obsession is her strength, and she'll stop at nothing to protect him from any and all threats.

everyones disrespectng Yuno like she some low rate basic bitch. Shes written prety well. And comparig her with Shion makes no sense either since Shion had a brain parasite. Both were very crazy, very cute, and were very fun to watch. So you little shits shouldn't debate. If you dont like her shut the fuck up. if u like her, i respect your opinion more, but shut the fuck up.

Can you prove she is a clinical psychopath?

i ordinarily never despise the psycho characters in anime, but god damn yuno pissed me off!

The yandere queen debate has grown stale. Who cares which character is superior? Both Yuno and Shion are impeccably written.

Reasons why Yuno gasai fails as a character

her character has aged VERY poorly compared to other characters of her archetype.
She only cares about Yuki and considers other people who want to live "monsters." Yes, I get it, that's her character, but that doesn't excuse the fact that she acts like such a bitch towards any other friends Yuki makes, showing no empathy for them if they're dying and only cares for Yuki. Even then, her love for Yuki isn't even a redeeming feature as she drugs him, kidnapped him and even tried to RAPE HIM!
And NO! Her backstory doesn't make ANYTHING she has done OK! Sure, it's an explanation as to how fucked up she is (to an extent), but by that point, Yuno has been so annoying that it's hard for anyone to give a damn! I'd rather sleep with Esdeath than even think about mating with Yuno! (Not that she'd take no for an answer, but still) Even Lucy from Elfen Lied, as murderous and petty as she was, had a backstory you could KIND OF sympathize with because of what we know about her. Yuno on the other hand is unlikable from beginning to end.
But apparently this is supposed to be a perfect romance because "She is always there for him and sticks by his side!" BULLSHIT! The milk spot near my right eye and the wax in my right ear always stick by my side, but do I like it?! NO!! This has to be one of the most fucked up relationships in anime! But it's OK, because Yuki is retarded anyways (Seriously, he treats this girl like she is goddamn saint...When he actually loves her. But we'll get to Yuki, as I have a lot to say about him in particular.)
Yuno's only two character traits is that she is crazy and loves Yuki! Compare her to ANY other yandere and it's easy to see how empty she is and doesn't feel like an actual person DESPITE being the 2nd protagonist. I've seen more fleshed out female characters from Sword Art Online!
Her motivations also make no sense. She selfishly kills off Yuki to become God for no good reason, and even if she planned to revive him? What has changed? We still don't get an explanation, she even says herself she has no interest in becoming God. Also considering Yuno was gonna revive Yuki and Deus can't bring people back from the dead, why doesn't Yuno ask him if she can revive Yuki BEFORE she kills him?! (The only person to ask Deus this question is Akise, WHO ISN'T EVEN A COMPETITOR IN THE DEATH GAME! So what excuse do the other Diary Holders have for not asking the same person who is HOSTING this game?!)