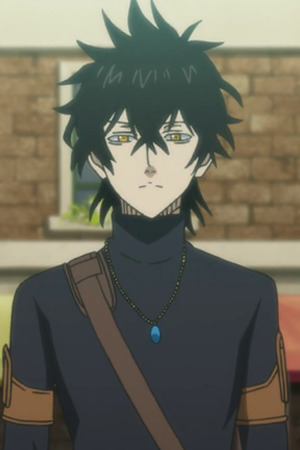 I feel like he wasn't developed enough. He doesn't have much personality and they don't show the bonds he has with other characters. It seems like he's there to simply be Asta's rival. He's not a bad character but I feel he is overpowered and just too lucky which can be frustrating at times as Asta works just as hard and even harder but Yuno easily surpasses him. I like how you can tell he cares about Asta but I find it annoying how he doesn't stand up for him and takes the credit that Asta should have gotten. He's a little too "perfect" to seem realistic. He never makes any bad decisions and always gets stronger and stronger with barely any struggle. I think he's too hated by everyone but he doesn't have enough screen time and development to be considered likeable. I think the times I liked him the most is when he doesn't underestimate Asta and tells others not to either, it's funny to see him root for his "brother/friend". I wish they would show more of their friendship because it seems that Yuno should value him more since he's one of his only friends. I don't really get that vibe from him though, he's too emotionless for my taste. Ya I guess I didn't need to write a whole paragraph on him but it only has like 20 comments so might as well.

am i the only one who thinks yuno's a bit over hated? i feel like he's been misunderstood by those who have either been skipping through the series or are thinking more about the way he was first introduced instead of what is currently going on bc he actually gets better despite that he and asta are rivals and the way he has treated him before he is still defensive over asta its normal for friends "siblings"  or any other type of relationship to argue

He's fucking hot but his personality is just not developed enough.

The character development is there, but the personality isn't, one of the worst characters in the show because of bad writing