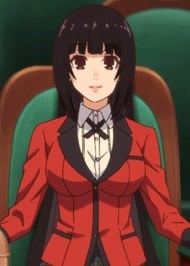 did someone rlly just write a whole fucking paragraph? 💀

She reminds me of tomie

I probably shouldn't be attracted to her but oh well...

I think Yumeko is a great character in the anime, although I cannot speak for the manga because I haven't read it. There is a lot of underlying symbolism and complex psychology behind her character. In general, she is Kakegurui in the form of a character.

Here is the symbolism I noticed. While Kirari embodies God, she represents Satan. This is shown in the first opening theme, which is fittingly titled "Deal With the Devil"; this "deal" is the agreement to gamble with Yumeko. She and Kirari are surrounded by fruit and fish. The former alludes to the serpent's enticements in the Adam and Eve anecdote while the latter refers to Ichthys, a fish-shaped acrostic deemed sacred by the early Church. Because Kirari often compares the order she has established to an aquarium, let us assume the fish is her symbol. The fish may also indicate the duo are manifestations of Yin and Yang, which is reasonable considering their black and white designs. In addition, a shot where Midari shoots a girl whose head is a strawberry is featured --- after shooting, a banner stating "Heaven or Hell" appears. In terms of roles and actions in the series, Yumeko carries the debts of others, disrupting the system, and Kirari maintains the debt system itself. This symbolism also exposes some undertones of Christianity, as Yumeko and Kirari are not the polar opposites people perceive God and Satan to be. The color schemes of their designs differ entirely. Black is a prominent color in Yumeko's design, signifying darkness, and Kirari's design is primarily white, representing light. However, these can also represent other things. Black is associated with mystery, rebellion, sophistication, elegance, formality, aggression, and evil. Satan is considered evil. Given Yumeko's well-kempt, 'yamato nadeshiko' appearance and courteous dialogue, the messages of formality, elegance, and sophistication are valid. However, this design is also reminiscent of many characters in Japanese horror such as Tomie, Enma, and Sadako. It implies she is a mixture of both and further reinforces her duality. Her breaching of Kirari's system is rebellious, and her largely unenumerated background is mysterious. Elementally speaking, red and black are respectively affiliated with fire and water, further showing Yumeko's duality.

On multiple occasions, Yumeko is compared to a Joker. Yumeko has duality, and Jokers are very versatile in a deck of cards depending on the game one employs them for. In Wicca, the Joker is represented by the number zero, a character which includes the meanings of all or nothing, stoicism and comedy, wisdom and idiocy, and delight and despair. The message a joker brings is cryptic, disguised, and mysterious. There are typically two in each deck --- "dual" jokers. Playing cards have existed for more than a millennium, but jokers were added later; the system Kirari established thrived for quite some time, but Yumeko appeared and challenged its rules, much like the Joker.

The symbolism is even present in her surname. It can translate to "heavy drinker", which alludes to her addiction. "Snake", "serpent", "bite", "eat", and "drink" are other potential translations. The idiom "snake in the grass" applies to Yumeko and may be one reference within the translation. She "hungers" or "thirsts" for gambling. Most importantly, "snake" or "serpent" may relate to the Adam and Eve tale, making the fruit in "Deal With the Devil" a symbol of her. She succumbs to her desires and encourages others to do the same - to "bite" into the forbidden fruit. She has a well-known quote in which she says something along the lines of "Would you rather live in ignorance or die knowing everything?", which is similar to the logic the serpent used to persuade Eve into eating the fruit. In the first episode, Kirari said, "A serpent has arrived at my Garden of Eden" when she first heard about Yumeko. Yumeko's forename translates to "dream child", which is how she appears on the surface, but her surname is what she is on the inside. To add to the idea that Yumeko is the serpent, she corrupts Suzui at the end of season one during the gamble between Yumeko and Kirari, encouraging him to sin by taking a hedonistic risk.

Now, I want to touch upon her depth as a character. In a sense, Yumeko is a tragic character because she has a moral conscience, but it is repressed by her psychological dependence on gambling. She was raised in a clan of avid gamblers, so she is at high risk of addiction. Gambling is her lifeline; she is willing to sacrifice anything in a gamble because nothing else gives her life meaning. Her sister was hospitalized because she went insane after losing everything in a clan conflict - a gamble. Yumeko appeared apathetic about it, which angered Rei, who had a good relationship with Yumeko's sister. She asked Yumeko if she felt remorse for how she has hurt people with her gambling addiction, and Yumeko wistfully stated she feels guilt for not feeling guilt. That is the epitome of addiction. It reflects that Yumeko has sensitivities and regrets, and her addiction prevents her from addressing them. Acts of kindness are shown by her. She shows a lot of courtesy to her peers. In the first episode, she gives Suzui billions of yen. In the second episode, she criticizes the immorality of how Yuriko treated Meari. She wants others to feel the same thrill she feels - the issue is that she doesn't realize others cannot gain the same thrill because she is addicted.

Some of Yumeko's background is ambiguous because she is meant to be a symbol of mystery, as aforementioned, but there are hints and insinuations in the narrative so that viewers can interpret and theorize. When asked by Mary if she was familiar with any of the -bami students, she hesitated and then answered dismissively, suggesting her response was to an extent fabricated. When Rei unintentionally visited Yumeko's sister in the hospital while Yumeko was visiting, she saw little sympathy in her eyes. Yumeko asks Rei the following question: "Do you know what it feels like, too? When a person sinks into despair?" The manner in which she phrased this implies she has sank into despair, not solely her sister. The -bami clan is known for resorting to torture and other atrocities, which she may have witnessed. Her parents are dead for unknown reasons that are likely tied to the clan. What is not known are the reasons and effects of these things; there are lots of possibilities to contemplate. Normally, I would dislike a character whose background is not explicitly fleshed out, but in Yumeko's case, I don't think that is the point. Her character is about spiritual and sociopolitical symbolism; she is tied to the Joker from Batman in that she symbolizes a Joker, and like the Joker in Batman, her background is shrouded in mystery. She is also a foil character for the other characters, facilitating their development such as Yumemi, Sayaka, and Suzui. Her past is ambiguous, but her worldview - what her past has caused her to become - is crystal-clear. We have been given enough information to deduce her opinions on legal issues such as euthanasia. For example, she said something akin to, "Choosing how you die is choosing how you live".

Basically, Yumeko is great. She is not your traditional character, and a lot of thought about many things was put into her writing.