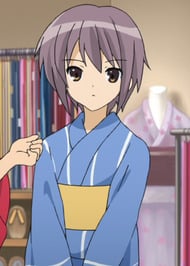 Yuki Nagato is quite the strong, silent type. Any time she's not being roped into Haruhi's antics, she can be found sitting by herself, flipping through whatever book she may be reading. Though she may lack in conversational skills, she possesses a vast intellect and usually explains things in a manner more complex than necessary. She is fairly emotionless, though if someone were to pay close attention, they might be able to figure out what's going through her head.

Maaan..., I liked Nagato to begin with, but in the movie... Oh man she is so cute and adorable. I like her so much now. She is a beauty with her glasses and without. She is awesome in the normal universe and in the alternative universe.

My waifu! Figures I'd choose an alien-human interface to direct my affections to, but it's too late now, I'm committed. :)

Along with the movie, I LOVED her in the episode "The Day of Sagittarius" where she pulled out the rug out from the Computer Club's shenanigans!

This is one of those characters that you really need to watch carefully, her change throughout the series is subtle but heartbreaking, especially in the endless 8 arc where she is in despair, stuck reliving a period of time over and over, unable to do anything but observe it whilst everyone around her is happy.

in the manga she is asked to write a story and there's a part that gives you an insight into her;"...just as I was trying to return to where I belonged, something white began falling from the sky; many small unstable water crystals. They were one of the wonders that fill all of space time, this world is overflowing with wonders. I stood there, still. The passage of time lost all meaning. That wondrous stuff continued to fall, piling up like cotton. I decided that would be my name. So I thought, and in thinking so, I became a ghost no longer."