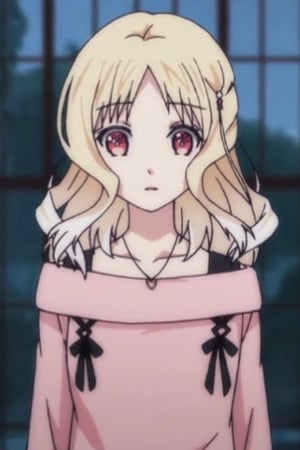 Everything about why this character is trash has already been said so as someone who played the games years ago to torture myself I'm just gonna give people the reason why she is the way she is so ya'll can really see how terrible Yui and this franchise is general is. Diabolik Wifebeaters was originally a visual novel, and in the visual novel, the choices were labeled as either S or M, aka sadistic or masochistic. The only way you got "good/best ending" (which aren't good or best because how df is continuing to be the food for an abuser good lmao) is if you choose the ridiculous submissive and doormat choices aka M choices, neutral endings if you choose between being a doormat or a normal person aka chose a mixture of S and M choices, and worst endings if you have the audacity to defend yourself against being treated like an animal aka S choices.

YEP, that's right, you are given BAD ENDINGS FOR BEING VOCAL AND GUARDED AGAINST AN ABUSIVE RELATIONSHIP. One best example is in a DLC visual novel where Kanato forces Yui to come with him at a party and decides to get many sweets but not let Yui have any since she had the AUDACITY to be talked to by other people. The good/best ending routes want you to just sit there and sniff and be compliant as you're starved and not allowed to have any desert as if you're a 6 year old. The S choice, which is to, like a normal person, let Kanato know that you are you're own person and can't be told what to do like an animal, puts you in a neutral or bad ending. YEP, I'M NOT KIDDING. THIS SERIES IS ABSOLUTELY DISGUSTING.

I'm confused... Isn't see the victim in this anime??? Why r ppl hating her more than the abusers??? I don't get it.

I haven't read the manga but I know she is WAY BETTER in the manga. But in the anime...why does she act like an idiot?

why is she always moaning

Because of the comment below, I will wait before establishing my opinion on her character. In the anime, she was so stupid and annoying though.