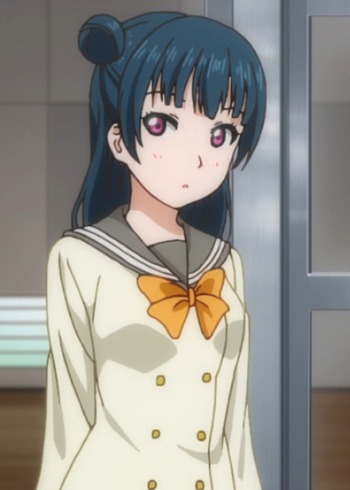 Though I'm referring to the dubbed version, I truly believe her to be one of the most interesting, loveable and silliest anime characters I've ever had the pleasure to watch. In fact I think she's actually my alter ego..

Ok...ok... I want to like her, i mean, to like her even more, in both series i found all characters impossible to dislike. But... the entire fallen angel shtick became soon annoying in my opinion, considering that i still play the mobile game daily and i started it last march, a couple of weeks before beginning Love Live Sunshine the anime. This means i doubled the entire "Don't call it a shtick! And it's Yohane!" for some time.

But... strangely enough, Yoshiko manages to be funny exactly because she is annoying. The voice actress had probably the hardest part in all Aqours cast, she had to pull off all the wild mood swings of her character and did it flawlessly (plus, is one of the best singers in LLS). And i won't deny that Yoshiko herself is pretty (the profile picture of this page is a great example), but even better are all the times she made unforgettable funny clumsy faces, as in the pilot after recognizing Hanamaru or when she's discovered by her mother while filming vlogs as her alter ego.

All in all, she also receives the like button as all M's and Aqours.

Overrated, but still better than Riko and Chika

My precious and adorable fallen angel~

I wish I could give her more than 1 love