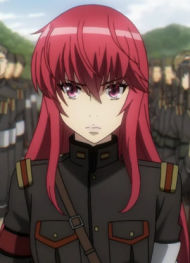 Saw someone saying she sucks bcs she stops ikkun???? she's literally protecting him, it's clear she agrees with some of the things he thinks and says, she just doesn't want him to get himself executed. it's all for nothing if he gets himself killed by speaking his mind to the wrong person at the wrong time, she cares for him and you can tell that she just doesn't want him to die.

idk what show they watched, but it clearly wasn't this one if they think she's trash and just stops him unnecessarily, she's literally just saving his ass and used minimum force to do it. it's her way of telling them "i'm sorry about his outburst, as you can see, i'm punishing him, so please let his mistake go." rather than letting them execute him for blasphemy or treason.

The very definition of tranquil fury.

Yatorishino IGSEM is just a big piece crap she stop's the MC from doing anything that would not be to bad if what the MC says and does was also dumb but it's not he knows whats up the princess know whats up by Igsem stops him all the time being really unhelpful at all times.