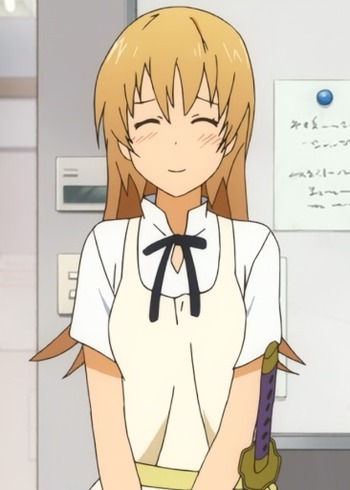 Super happy she got with Satou (o´ω｀o)

I want her to slice me up.

She might be the most intellectually challenged character on the show.  LOL.  How can she be so dense she does not even realize the effect of carrying around an ancient equivalent of a bazooka like it was normal?  Not only that but she too frequently uses it as threats and/or nearly kills people.  She is also too dense to see even the most blatantly obvious signs Satou likes her so her IQ must be pretty low as well as her common sense must be near zero as well.  I don't really hate her but because she lacks common sense and acts like everyone around her is weird because she is too stupid to realize the threat level of her carrying around a weapon like a katana has, I can not like her either.