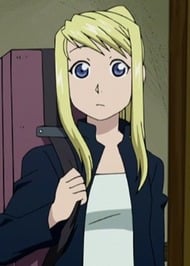 What a cutie pie. I love her to death.

I'd like to add that she fell in love with Ed and then continued on with her life. She didn't act like it was the end of the world if he didn't love her back unlike so many insufferable anime girls.

There are numerous reasons why I adore Winry (although please note that I'm referring to Brotherhood/the manga for her character. I have not seen much of '03 nor do I intend to watch anymore.)

-Unlike many other shounen female leads/love interests (Sakura, Orihime, Hinata, Mikasa etc), Winry is not defined by her feelings for Edward. She has a life outside of him that Arakawa never shied away from showing/developing.

-She's an intelligent and competent career-woman, forging her own path in Rush Valley.

- is literally the only reason Ed can walk. Has pulled numerous all-nighters for this purpose.

-She freakin delivered a whole baby in Rush Valley like the girlboss she is.

-Her emotional strength. She lost both her parents and she found a way to pick herself up and keep going, following in their footsteps. She had the option for revenge and she didn't take it. When faced with her parents' killer a second time, she chose mercy because that's what they would have wanted.

As a sidenote, I think a lot of people interpret crying as a weakness and there's a lot of media that caters to/contributes to that mindset, but I adore the way Arakawa deconstructed that honestly kind of toxic mindset in this series and with this character in particular.

Yes, Winry cries, but that's not a weakness. She cries because she's empathetic and caring. Because she sees the Elrics, two boys who mean the world to her, hurting deeply and it hurts her. Because she lost her parents and she deserves to have that moment to let it all out. Her compassion and her empathy are her strengths. Crying for other people isn't a weakness.

She lives her emotions honestly, but she isn't ruled by them.

- She subverts the hell out of some tropes:

First we have Ed keeping secrets from her in the classic 'it's for her own good' reasons. Except it isn't. It hurts her. And when Ed realizes this, he changes his behavior accordingly and he lets her in.

For the benefit of all, because when Winry realizes Kimblee is using her as a hostage, she doesn't sit there passively and wait to be saved. She takes a proactive role in her own rescue and gets herself out of that situation on her own with her own idea. The narrative doesn't let Ed stop her, because it's not his choice to make.

So, yes, Winry is an amazing and compex character and one of the best shounen love interests and I will die on that hill. (And, I kinda would argue that she's one of if not the best written out of the female cast, imo.)

If you can't tell, I adore Winry. I'd say sorry for unloading, but... I'm not sorry at all. This girl is amazing.

To those who claim Winry is useless . . . she is literally the only reason Ed can walk. The story would've never happened if she hadn't given him an arm and a leg. Go try creating a prosthetic limb yourself and then tell us Winry is useless. That aside, she is also the only reminder Ed and Al have of who they have always been, the only anchor they have in a normal life. She is necessary.