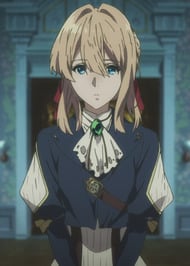 I love Violet so much. I just want to hug her.

How has this soundtrack not won any awards? I believe this to be quite possibly the best arrangement of music for a film/tv series ever in the history of film and music. I have wondered that ever since this show first came out; constantly listening to it over and over makes me even more confused as to how the soundtrack hasn't won any awards. It's so unique and uses and a plethora of instruments to set different moods throughout the 2 hours of the score. We need to somehow get this nominated or something even though it's a few years old.

"Shitty character with no personality" this woman was a killing machine and a child soldier used as cannon fodder during a fucking war she was raised without love, not treated as a human being, only spoken to in military commands, but I wouldn't expect morons to be able to understand this is why she appears socially awkward, emotionless, and robot-like.