Aka: The Prince of Saiyans, Vegeta IV 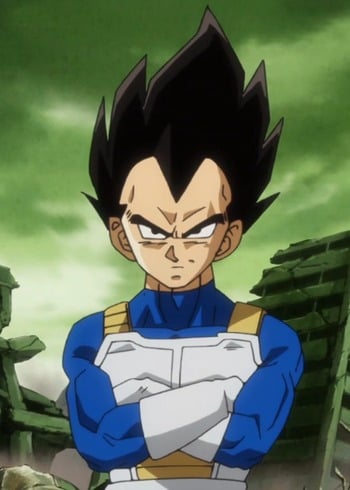 He has the best character development in the show and the best choice for my girl Bulma.

they should delete "racial pursuit" because he is married to human and have with her two kids...

Always my favorite character, to the point where nowadays I prefer seeing him as the hero than Goku.

Racial Purist????.....I dont know about all that......He's married to a human whom he had two kids with....He just has Pride in who he is and what his people are capable of when they dont give up.....He has one on the BEST character developments on the show. he was a villian, then he was an anti hero, to full blown hero...yes he does have an ego but that just who he is not everybody who is good need to be friendly...I love what they did with his character in dragonball super he's still tough but we can see he has a softer side especially when his wife was attacked by beerus, or when he trained cabba (his opponent) in the middle of a battle (EPIC)...etc I think he was robbed of his revenge with frieza (who enslaved his people, took him away from his father, killed his father, destoyed his planet, killed him that one time, etc) and just when he had his revenge it was taken from him by GOKU (what a shocker)... I hate what they did to goku character in super, they made him an idiot but thats a whole other can of worms. in a nutshell vegeta is awsome.