Aka: The Humanoid Typhoon 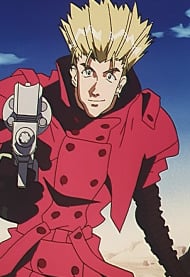 why doesnt this guy have the 'human guise' tag tho?

Having a character that embodies two extremes at once is nothing new, but how many so effortlessly tie this duality into a single core trait? The source of Vash's goofiness is the same as that of his badassery; they're not merely two contradicting traits he happens to posses, though it may appear that way at first, but instead two differeing expressions of one fundamental essence. For as genuinely fun a character as Vash is, there's a ton of quality writing that went into him. I know why he was the first anime character I ever fell in love with. Attack on Titan might have opened me up to anime, but Trigun sold me on it.

He is THE KING of being a walking contradiction and I couldn't love him more for it.

It's everyone's favorite gunslinging pacifist! The perfect balance of idiocy and badassery, all wrapped up in a highly entertaining package. And he's a big ol' sweetheart too.