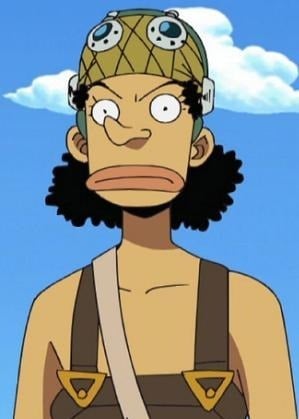 Though his tall tales often state otherwise, Usopp is a complete wimp who will regularly hide behind his stronger comrades rather than fight. However his skill and accuracy with a catapult earns him the title of the Straw Hat’s sniper. He often embellishes his adventures and regularly downright lies about them, but despite his spineless nature he has a good heart that can overcome his cowardice when it really matters. Usopp is incredibly inventive in his fighting style, more often than not resorting to cheap tricks and pranks such as pelting an enemy with rotten eggs or pinging a rubber band at them.

I already know damn well that he's disliked because he doesn't have some 0815 badass design going on, but here me out. Usopp's Character Development was amazing in Water 7 and Enies Lobby. Him getting Haki after the timeskip in Dressrosa was epic. I mean, Nami and Robin are literally just there for fanservice after the timeskip, their designs are that sexualized, it's annoying. Chopper is literally just the Mascot of the Strawhats after the timeskip, also annoying. Franky got to fight Senior Pink after the timeskip but that's it. Brook had nice moments in the Cake Island Arc. Sanji got massive character depth after the timeskip with his tragic backstory. I liked Zoro more before the timeskip, but his time will come in Wano. Luffy's the same. Usopp just feels so real, he's the weakest member, but he's not some 0815 character and he's also a genius considering how he started of and is now. He's "cowardly" but did so many brave things during the story that I wouldn't even call him cowardly anymore. Fought so many characters above his strength and saved Robin in Enies Lobby.

Oh, and lets not forget him being Sogeking.

So nobodies gonna talk about how his character design is offensive and points to a large problem of insensitivity and racism in homogeneous countries?

So are you just gonna pretend that the whole deal with him fighting Mr.4 and getting his skull broken by him, yet got back up and won against him, seeing Merry's ghost in Skypia, trying to protect the money from Franky and his Crew and getting beat up by them, going against Luffy when he decided to change the ships and leave the Merry, fighting against Luffy and putting a good fight, not giving up on the merry and his whole conversation with Franky about the ship, becoming Sogeking to secretly help Luffy and the others in Enies Lobby, helped Luffy to get back up in his fight against Lucci, becoming muscular after the timeskip and the most "dangerous" wanted person in Dressrosa, literally being called God Usopp, developed his Haki and beat Sugar, etc doesn't exist? What kind of Character Growth did Nami and Chopper even go through after their timeskip? Usopp has more Character Growth than everyone else in the Crew.

There absolutely no growth in this character for anything he does. It’s embarrassing that even Nami and Chopper who are useful and strong while Usopp isn’t even useful or strong... I hated him even more after the Dressrosa arc.