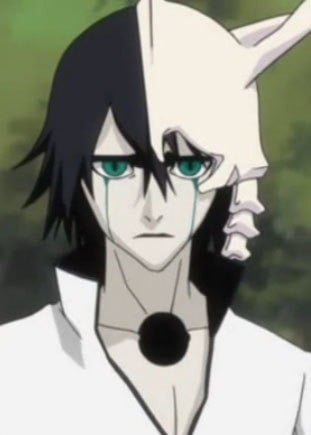 Ulquiorra is one of the strongest of the Espada and one of the most trusted. He has a consistently calm demeanour about him and he never shows any emotion whatsoever; very little actually surprises him. He has a great confidence in his abilities and doesn’t hesitate to look down on anyone below him, often appearing wholly cold and callous. Unlike Grimmjow, Ulquiorra is not easily antagonised and will only fight when necessary.

Come I can’t hate someone who wants to know what emotion is ? And what’s to feel it 🤨 plus great villain tbh

I think his “redeeming” qualities have to do with how rational, calm, and intelligent he can be despite his origins and the nature of his kind.  Most of them can’t approach his character or his drive to improve.  Basically, whether he would admit to or not, he displays more human characteristics than most humans do and therefore, he is ostensibly capable of perhaps evolving more or even capable of the same traits as the hero characters.  It is only tragic that either fails to realize this or simply fails to act upon his true potential.  Besides, though it may have been for a calculated reason, he occasionally did good things like saving them from Zero’s attack.

I don't know why,but shipping Orihime with him is an insult to his characterization.

My favorite villan ever