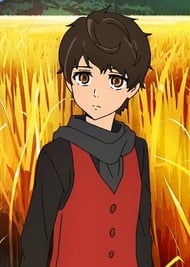 I feel bad for this but I actually don't like him much tbh. There are very few simp characters that I actually enjoy and he's not one of them.

rachel and khun carried the show for me .he is kirito 2020 and the worse is people calling rachel spoiled when this dude got the test because he is cute

I like him a lot more now that I've finished the anime. While I definitely don't hate Rachel- she's one of the more fascinating characters next to Khun- I feel so bad for him for having done everything he did for her only to get... that in return.

ngl i feel like the hate he gets are from the same dumbass victim blaming mfs who either have not finished the anime or haven't even read the recent chapters in the webtoon which pisses me off like yall should be hating on rachel not baam yall know that. yes he was a simp at first but he had good reasons for that bc rachel meant everything to him she was the person he cared about the most she was like a mother, aunt, and a sister to him and if you think about that time she left him she wasn't gonna come back she was just gonna leave him all alone in there for a fucking tower however he wasn't aware of that all he wanted was to go with her he did everything he could for her and what does this bitch rachel do? she pushes him off just bc she wanted to be in the tower by herself. what's even worse is that baam's not the only one she betrayed. she even had this same kind of relationship and bad ending with khun and other dudes as well. in the webtoon when baam confronted her she deadass said that the tower was more valuable than baam. need i say more for yall to understand why rachel's the real enemy here?

Only took him 350 chapters, but hes finally starting to act like a actual human being.