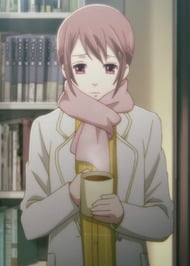 damm yall on her ass in these comments. i thought she was fine lmao

Wow. These comments here are the most biggest piles of shit that I've ever had the misfortune of reading. Especially Cabbage89's sexist stupidity.

This character was so bland and lacked any trait of a good character, aside from giving anzia boners once in a while she has nothing to offer but cheap female characteristics that i've seen a million times. I honestly do not get that the two main female traits in popular manga are either really shy or really mean. While being shy, cute and kind is excusable for some characters that is all this woman has, i've rarely seen female characters in any manga illustration really pop out and not be some body that occupies space in the pages and i'm so tired of 'girl has crush on boy because heart poundy' and vise versa. I will honestly never understand why most authors have trouble with making a female character in personality versatile as opposed to giving her 2-5 traits and then running with it, granted the author did give me that one drunk woman though i hardly remember her name because she was not memorable enough as i could not see her as her own person, this author does not give this girl range, emotions or goals throughout my time reading this. She is so one note and is  just a huge waste of time and instead of having my boy anzia deal with his stuggles with support of his friends and throwing romance out the window or not have romance be the main focus we get this mix of action, mystery and romance garbage that could have been so much more awesome if her charcter never existed or her screentime was minimized.

Yuuki's personal blood supply. There's nothing more to her other than that.