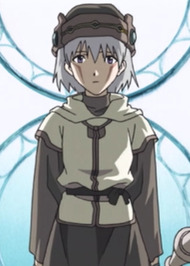 Tsukasa is an anomaly and a mystery to the other players of the game, especially as he mostly keeps to himself. He only seems to get along with Maha and finds his trust in other players broken fairly easily. After being targeted by the Crimson Knights, Tsukasa struggles with the emotional strain of being trapped in The World. Easily depressed, he tends to put up a front around others.

Tsukasa... I don't have any words to describe you honestly. But, I like him a bit because of his cuteness and also the fact he is boring is true. Why is he so pointless? because he so quite and emotionless. The rest of the characters in this series are a bunch of trash-looking guys.

A great character. And I know the anime is slow paced, but give it time. Pay attention to the show, and you may love it.

This character and anime are classics.

I love this character, but they are the reason why the show is so slow-paced, which turns off a lot of viewers.

As many realistic representations of traumatized teens go, you'll probably only like the character if you can relate to them.

Tsukasa. I don't have much to say about you besides the fact that you're a little bitch who whines the entire series. I love this show, but you're just a sore in my asshole.

Why did they make this anime?  And why have this character as the lead?  Tsukasa is the most boring, useless, pointless, lead character ever.  I tried watching this several episodes in and them some, but he is sooooo boring.  All he does is mope around about how depressed he is and how little interest he has in the real world, game world, life, or anyone or anything in it.   Whoopee do.  I keep waiting for something to happen besides getting bored and tired enough to fall asleep just a few minutes into each episode, but nothing ever changes so far.  If it does eventually, then that is poor writing and directing for taking so long that they lose viewer interest so profoundly.  I do not know how anyone could bear to stay awake for more than maybe 7 or 8 episodes before the tedium becomes too much to bear.  I think even Treebeard would get bored and fall asleep and he likes to wait long periods of time for anything.  He has to be one of the worst lead anime characters ever mainly from his inaction or exceedingly slow action and his personal character trait monotony to extremes beyond human limitation.