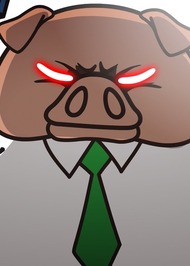 He is the best character in the anime, change my mind (after you watch all seasons).

Honestly I hated him but he shows some maturity in episode 10 season 1.

kinda grew on me. love his twins.

This character leaves me split. He obviously is bossy and abuses his power. Then again he's the most capable in his field of work with calculating and he did show mature side in pisode 10, advicing retsuko. I hope he gets some better character development because when he said he was worked to the bone too when he was younger, I took that serious. It's often a cynically funny moment where people declare they hate that job or would never turn out like them when in reality and 10 years, they do that job or become that person. I don't know... some nice character developmet expectations here.