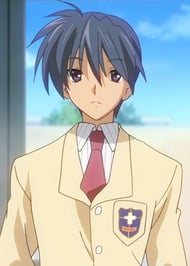 Tomoya's habit of consistently showing up late for school has caused him to be labeled as a delinquent. Despite this, Tomoya is a diligent worker, kind, and genuinely wants to help people with their problems- when he isn't being sarcastic or playing practical jokes, that is.

As expected most reviews on both Okazaki and Nagisa are riddled with calling them bland or boring characters, but I must say that as I approach the ending of Clannad:AS, Okazaki's development as a character though slow at first, really comes around full circle later on. Okazaki has it rough, real rough. Though, his resolve (with the exception of white darkness and its 5 year gap) is unwavering through each trial and tribulation he faces. Him and Akio are probably the best guys in the whole series.

Okazaki really likes to butt onto others affairs but when it comes to his best friend he couldn't care less.

Possibly one of the blandest main characters I've seen in a romance anime tbh..

Cynical, not oblivous, actually decides on a girl by the end of the first season, and turns from a cold-hearted loner into a loving father by the end of the series. This man has transcended all other Harem protagonists by a hundred miles