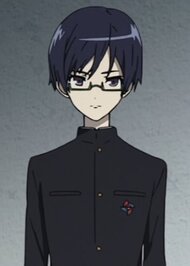 You guys should probably keep in mind that they're all about 14-15 years old and obviously not mentally prepared enough to deal with being thrown into a scenario where anybody could die over the smallest mistake, let alone almost being murdered by your childhood friend. It was obvious the majority of them were going to panic.

I feel bad for him, though. It seemed that he really liked Yukari Sakuragi.

This mf really said, ight I'm just going to start killing at random till something happens

So, who else thought that he was the extra until the very end...?

What's up with the blue-haired guys with glasses? There are so many of them in anime.

But I love Tomohiko since he's crazy.

I could be wrong though