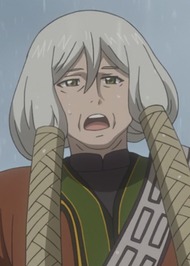 her voice is so pretty...

Love her or hate her, Grandma always makes me ugly cry in the end. I love her song.

The reason I have to add her to the hate list is simple.  She supposedly cares for her granddaughter, Nike, but she never bothers to either ask Nike how she felt nor considered her feelings before she imprisoned her and tried to steal her life away in the most despicable and underhanded way unbecoming of anyone's family.  If Nike truly had issues, or she acted sooner, or she at least bothered to check with her first, I might not have added her but because she did, she proves she is a selfish, self centered, narcissitic, twisted, evil woman who only thinks about herself.

Only reason I put this lady on my "like" list is because in the end, she let Nike go back. Even though it makes me mad that she lied and went to great lengths to keep Nike, she only did it because she loved her deeply and wanted to have her for herself (and who wouldn't)!