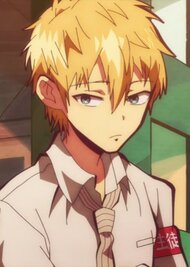 He was cute in the manga

Teru is a bit overrhated, honestly. Yes, I understand people hate him for wanting to excorcise Hanako or telling Hanako that was planning to kill Yashiro but it's his job to excorcise Hanako. Plus, he knows Kou would get upset if he did anything to Yashiro.

In chapter 87, there was an argument between Kou and Teru and yes Teru did call him weak and was a bit harsh to him, but you can see how much he cares for him when he immediately saves Kou from that thing that kidnapped Ao-chan. He dives in sacrficing himself for Kou ( this is a review before chapter 89 has come out ).

I am so conflicted with him! There are times that I do really like him, but then he goes and does things that infuriate me.

he needs to chill out