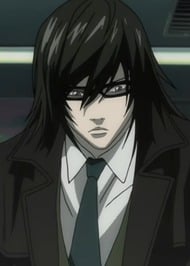 Mikami was too clever. Too clever that he is the reason, Light plan failed.

He was always so careless about the death note, but still a good character

I agree with most of the people below me, his black and white views were totally screwed up. But I can understand why he would think such a thing- at least while he was young- after all, he was exposed to people bullying his peers, not to mention that media usually draws very clear lines of who the villains and who the heros are. But you would've thought he'd drop the act once he was older and learned that the world isn't a Disney movie, and that most everything is in the grey. But apparently not. Wonder how the hell they let this dude become a prosecutor.