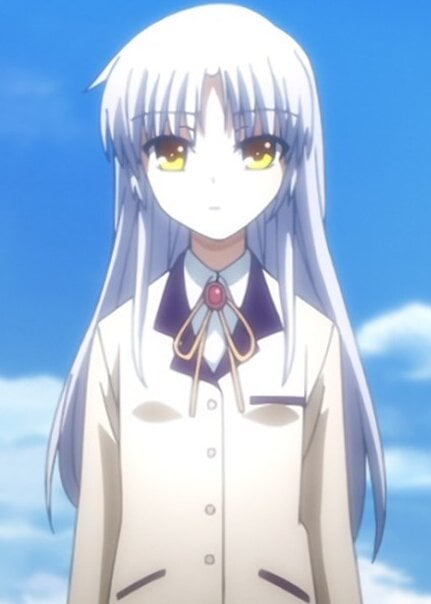 The eternal enemy of the SSS, Tenshi is the stoic president of the student council. Pronounced to be a manifestation of God by Yuri and the gang, Tenshi is constantly at odds with the group, fighting them with supernatural weapons that kill with ease, yet her true motives or feelings are unclear.

Though rarely seen, Tenshi has an affinity for spicy mapo tofu.

Absolutely a good character that didn’t get enough screen time

@TheIllIntent: Agreed. I loved what they did with Yuri and Otonashi, but they didn't invest enough time in Kanade. They basically kept her as a prop for the majority of the anime, and then randomly spilled a bunch of character baggage in the finale episode. I feel like her initial purpose was to be a mascot for Key, but they later realized she actually had to have a character, so they wrote something up at the last minute.

Technically,she is the titular tritagonist.

@CrimsonCondor: In only 13 episodes, the main story being told wasn't her's - it was Otonashi's and Yuri's. If we got a story that went more in depth about Kanade (including more details about her when she was alive), I'm sure she'd finally be able to realize that untapped potential.

I hated this girl for years, but now that I've begun rewatching the anime, I've noticed potential I'd initially missed. She was portrayed in a very lackluster manner in the anime, but I see this more as a story writing issue than a character writing one. Her true depth was always present; she just fell victim to a bad plot. She is now my favorite.