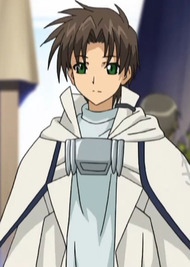 Although Teito came from a poor background as a slave, he has worked hard to gain the status as one of the most promising trainees in the military academy. Unfortunately, this impressive title only goes to antagonise those in his class and subsequently, Teito is the victim of numerous cruel bullies. Standing by him as a best friend is Mikage and the two form a pact to stick together. Short in stature, he can be snappy at people that like to tease him, but deep down he will always protect those close to his heart with his powerful zaiphon.

we get it gay boy , you love him

I guess the chains are appart of him now hahaha

no seriously, why did no one remove the chains 😀

I agree with Jem. He isn't afraid to show some weakness and as such grows during the anime. ^_^

This character grieves over the lose of his friend among the loss of other characters later on. This character breaks the usual sterotypes of men/boys, as he expresses his emotions, like crying over his loss etc. I actually cried so much in this series, I believe that the creators did a very good job in the illitrations and general story board specifically with this character, making you feel in sync with Teito's emotions and losing yourself in the story.

(Since there was no nice, decently constructed comments yet, I thought I'd add one)