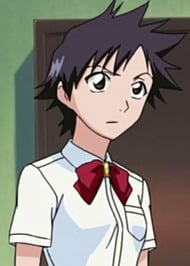 Tatsuki is one of Ichigo’s classmates, and she has known him since they were small children. Her best friend is Orihime whom she cares a great deal for and she often takes on the role of protecting her from both boys and Chizuru. Tatsuki is a complete tomboy and extremely adept at karate.

honestly disappointed when she got no powers. She could've been a much better and useful addition. Pretty sure she won't "Kurosaki-kun" her way out of a fight, she would've have a go w the enemy.

1: Um the comment below...I keep seeing this guy make these comments everywhere and I really do not know why he decides to talk about characters like this lmao.

2: Wasted character, which is a shame considering how cool she is despite that. She should have gotten far more focus than Orihime, I would have been fine with Tatsuki x Ichigo tbh.

I hate Tatsuki Arisawa, because she has high emotional complexity of complete levels and with complex attitudes and actions, high levels of emotional imbalance, Tsundere, high antipathy, disrespect, bullying and temperament of high levels, without many or no physical difficulties and disadvantages to demonstrate complex attitudes and actions (even because it makes the person demonstrate these fast and strong attitudes at the wrong times in inopportune situations for high agony, for extremely wrong motives in a matter of interruption, because of the imbalance and lack of control of their own human attitudes and actions, and she does it all the time in innumerable moments, and this demonstrates the true meaning of the high emotional complexity of complete levels), and even though she likes her friends a lot, she never showed high levels of empathy, never showed much attention for others, etc.

And my reason I don't like her is a reflection of why people hate her so much. I understand very well about her positive points like: high understanding, high positive depression, lack of intolerance and lack of high credulity, etc. And even though she is a good character, well potential and well developed, she will never be a much better and written character than many anime characters, and she will never reach the full percentage of her development, and the reasons I already said.

Remembering, I'm not saying she's a bad character, and those things don't make her a character worse off. I'm just saying these things because I'm explaining that she's an anime character, which is a character with surreal behavior, having the total disadvantage of dealing with rejection, loneliness, maladjustments, etc. And that would be the fact that Tatsuki is an Asian from the Middle East, that is, proving to be more deficient in knowing how to deal with numerous personal things in life, as most Asians do, due to excessive thoughts, etc. And that's a big reason why most anime characters are so overrated. And I'm not saying this for my own opinion or accreditation, but for a high sense of everything and conscience.

As I said before and I repeat it again, Tatsuki Arisawa was a potential completely thrown away by Mr. Kubo, this girl knew how to fight unlike the mentally retarded Orihime Inoue. postscript: I really don't understand why Mr. Kubo created so many characters if in the end the vast majority would only have a secondary role or would simply disappear.