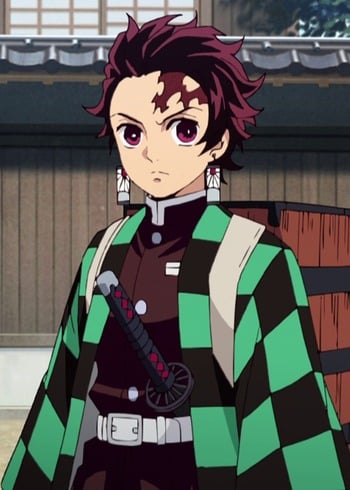 Highly unlike Deku, Tanjiro actually has to overcome his compassion in order to kill his foes. He doesn't like it, but that's irrelevant to the fact that the demons are a threat to society and as far as he knows, can't all be saved. The demons he meets have killed hundreds. Deku takes those similar villains but lives in a world where he's forced to keep them alive so that the police can incapacitate them, and so Deku doesn't even have this internal conflict. Tanjiro isn't like most shounen protags in the sense that he'll blindly believe in his enemies. Sure he thinks way too much, but I still think Tanjiro is a good mc for the world of Demon Slayer.

A boring mary sue. I'm sick of these "kindhearted" characters. It's always portrayed that they're so perfect and infalliable. This is basically just Deku 2.0. No good writing to be found.

We don't deserve this boy xD

Anyone know which episode this picture is from?