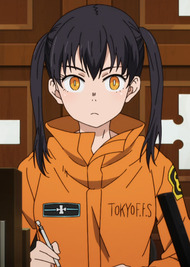 I don't mean to be rude but like, I feel like she's only on screen to show her body. I know that sounds wrong but whenever it actually comes to her in a battle they barely show her actually doing anything, the one time (that I can remember) she actually did well in combat on screen was when she was in her "training arc". All the battles she's been in have been super disappointing. She's also very stereotypic, for example, you can tell she's supposed to be a "Cute tsundere cat girl". I don't think it's very funny when her clothes just always "coincidentally" happen to slip off. Like, sure it was a okay joke at first but then it just became repetitive and annoying.

Too much fan service basically everytime she is on the screen. Don't contribute to battles only shows her body

Entire character is just that she has boobs and nothing else. horrible character compared to the rest of the cast.

The epitome of a useless character. If you removed her from the show nothing would be lost. In fact, you would actually gain due to the absence of tasteless fan-service.