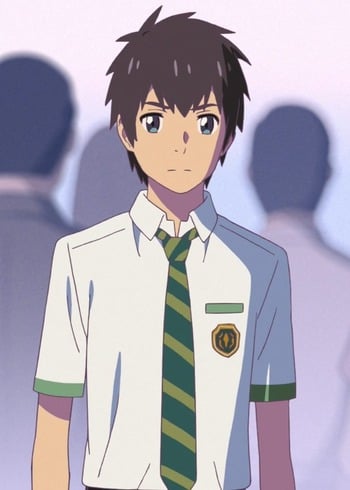 To be honest, how my friend described this character felt pretty boring. But luckily i tried the movie and look at me now, obsessed with my new favorite character which is that guy right there in the picture, no other romantic movies moved my heart except for this movie, this guy is one of the best anime characters.

None of the characters in this film had psychological intricacy or personal development. All the movie had was production values and a hurried relationship which was little more than a 'feels device' throughout the narrative. How can two people fall in love simply by switching bodies on a regular basis? They never spent time together. It does not make sense to me, although of course, I cannot say it would be impossible because it has never happened in real life before. It was certainly rushed though; I cannot see why people were invested in their relationship, given this. On another note, this guy is constantly groping the girl's breasts when they switch bodies, so I would argue he lacks respect for her, at least in this regard.

Truly magical and warming this character even though he knew the village and her had been gone for some time he still wished and fought to try and see her and confessed just to see her disappear. Btw they both stayed single the entire time in there adulthood like they had already met there true lover.