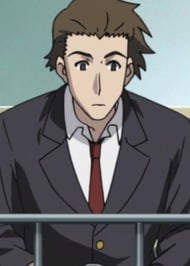 Apparently a rapist, missed it when I watched it, thought he was one of the only decent ones but guess not

Liked him until these comments told me he's a rapist lol

I wish he would have been the comedic side character and best friend offering kernels of good advice...unfortunately that's NOT Taisuke.  He's by no means a saint compared to his peers yet shouldn't have slept with Kotonoha when she was torn up about her relationship with Makoto. In a way he's an alright funny character in the OVAs despite being a pervy idiot. Personally would have preferred it that he and Sekai ended up together, though I wouldn't be surprised if they didn't.

This sicko was alright if not a bit annoying at first until he raped (yes that is right it was non-consensual, though the anime is more subtle about it compared to how it went in the game due to you know ratings) Kotonoha. Absolute trash.

THIS GUY LOOKS LIKE ME BUT HE'S SH*TY AS HELL!!