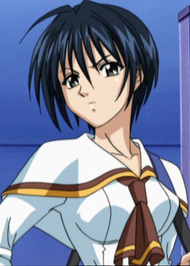 I have a love hate relationship with this character. I like her because she's a more complex character. There's a lot of inner thoughts and motivations that she has, and it also leads to tons of mixed signals and contradictions/miscommunication. Compared to most other girls in romance manga who literally have no brains for anything but the MC, she actually feels like she's her own person.

On the flip side, I also hate her because I actually can't stand people like this in real life.

This girl is wound WAY too tight.  I get that she's meant to be a tsundere, but she's more of the harsh side than the good.  She judges Yamoto based on standards of someone else and not for his own merits.  She is also too much of a perfectionist.  It is good to improve yourself, but trying to force that on others is controlling and wrong.

Not a fan, too fickle and stuck in the past. I loved yamato too much to see him tortured by her so much.

Voiced by Leah Clark in the English dub.  I love Suzuka and the show based upon her story.  She's a character haunted by her past.  Yamato loves her, but she doesn't make things easy on him.  She runs hot & cold, gives mixed signals...sometimes she shows genuine affection for Yamato, while other times she can be quite cruel.  She's drawn to him because he reminds her so much of her lost love....something she consciously denies but is true nonetheless.

Suzuka the series has the tag line "Love is not a spectator sport"; It could just as well have the tagline: "Love is a full contact sport", in the double-entendre sense.

I like Suzuka, but she's a deeply frustrating, complicated character.