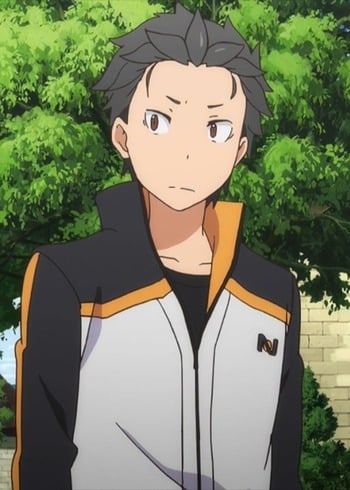 Honestly, fuck this guy. He's extremely annoying. Want to know your biggest mistake? Oh yeah, not falling in love with Rem after all that.

He deserves neither Emilia or Rem

I adore Subaru and it's genuinely a shame that he has so many haters cuz he's one of the best MCs ever. Ironically, the biggest trait that makes him one of best MCs ever also causes him to be so hated on. The trait is him being a realistic character. People hate him and think that he's overreacting since he always comes back to life, but he still has to experience each and every death, he feels the pain, he becomes more and more traumatized. And yet, he only wants the best for the people he loves. He forgave Rem who brutally tortured and killed him twice. He's always concerned for other's well beings. His dorkiness still ain't gone after so many traumatizing deaths cuz he keeps trying to cheer others up. He's flawed and realistic, but a good hearted human being who slowly develops into a stronger person over the course of the series.

Subaru-kun to 7-nin no Majo

I don't like him because he is arrogant as well as stupid. He is such a simp for Emilia who hé met very recently. Don't think I posted this because I like rem. Of course he wouldn't want to be with someone who tortured and killed him. He should of stabed her when he had the chance. Speaking of which why would you stay at a house where someone is willing to kill you in cold blood just because you have a crush on somebody there you met a few days ago. He has made tons of awful choices like everything he did right when he got transferred and when he decided to yell at the Knights. Dude if she can't handle being criticized even unfairly how do you expect her to run a country.