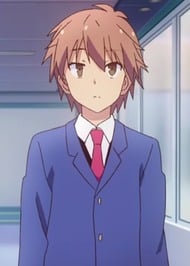 I rlly feel for this don. His attitude is very realistic to what a boy his age is like. Some of u man r saying he doesn't get his way and blames it on someone else, which i agree is the worst thing to do, but considering the pressure he'd gone through recently and his failures, its only natural for ANYONE to be angry. He was under pressure from the exceptional talents of his roomates and in an attempt to catch up, put himself through a lot of hard work and dedication, but the pain of losing out on his dream, getting left behind and seeing his peer achieving his dream without actually trying was too much for him to bear. In all fairness, shifting the blame onto someone else was the complete wrong thing to do, but some people, like AOYAMA was able to bottle her emotions in for a while, whilst Sorata couldn't deal with it. Tbh i think he receives so much hate for such a natural personality. Maybe not the most interesting of mc's, but still one of the more realistic characters in the series.

NotActuallyABot Thank you! Glad to see someone not as simple minded here as everyone else