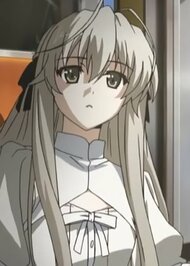 I'm not surprised that most of these comments absolutely despise this character, and also that there's the weirdos out there who genuinely take interest in the taboo and like this character for that purpose. It should be noted that, in eroge's and VN's niche or taboo situations are often commonly present, and this anime after all, was written out just like a VN (with multiple endings). With that in mind, I didn't bother to look into seeing Sora as a important MC, as she's more present in the show to almost cater to those who have protective instincts, mostly males. That's the appeal behind this character, is that she is designed to appeal to male protective instincts, at leasts that my interpretation. Where people may find her annoying, bitchy, and selfish, and wish for her to die, others may see her as a delicate flower who may be misguided, lost, or simply needs to open up. That's a common motif in the show (up until episode 9 so far, which is where im writing this comment) where it's blatantly obvious she's closeted. Just to clarify, I'm not defending immoral taboos, im just pointing out point of view on the appeal of this seemingly controversial character.

her personality is very cool i guess lol