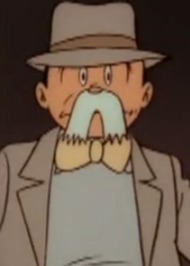 Shunsaku Ban is a member of Osamu Tezuka's "Star System." Tezuka designed these recurring characters to play a variety of roles, often with different personalities, names, or even appearances.

Shunsaku has a cameo appearance as a rowdy slave in the audience, at the arena where Emiya Tachi fights Pirar.

Shunsaku is Kenichi's uncle and an ace detective. He, like his nephew, is intrigued with the Fumoon after learning of their existence through Dr. Yamadano.

Some time ago, Shunsaku became Yuno’s guardian after witnessing the murder of his father. He’s intrigued by Green, a mysterious cat, and is determined to figure out the truth behind the nefarious feline.