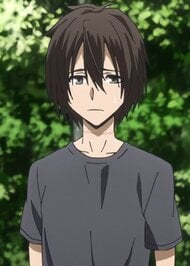 I HATE this type of not only character but people like him, like yes I get that he’s “normal”guy that is pretty much just thrown is to a horror game but and this is a big but he has at lest has a means to survive in it, but he with those means choose to let someone else do the fighting (namely Clair). When he just goes into denial saying s*** like “this is a dream”, “this isn’t real”, “I can’t do this” and he doesn’t even need to get the coins it’s not no him to be the hero.

Hell, he can just walk away and live a normal life as normal as you can get when you can become a living flesh suit anyway. Oh, and the whole he’s doing it because of blackmail just brake the f****** phone than boom no more pictures or videos of you transforming and then it’s your word against her’s and and she’s saying you can turn into some animal mascot. Who in their right mind would agree to that?

Now let’s backtrack a little to how he deals with fighting… wait he doesn’t he doesn’t even try to do so on he’s own he let’s Clair do it. He never even runs away from it all. So, we have someone that won’t run away, but also won’t fight even with he’s actual life on the line. So he doesn’t get a “I will look live and i’ll Kill those in my way” mentality.

P.S. The main reason I hate this character people like this is they have the means to survive but don’t do ANYTHING about their problems and their too prideful most of the time so they don’t even run from said problems but again don’t do anything about them.

(normal in “”s because he is not normal in a stance, but quick question, what do you when you find a dead animal on property that is not yours, that you don’t live on? My guess is that you just leave it it’s not your problem is it? No okay then on with life.)