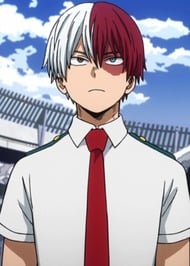 He has the same MBTI personality as me (INTJ). I really like Todoroki. His icy hot powers are cool, and viewers get a soft spot for his family.

I fell in love with his personality:) I watch anime a while and he is still on the top, don´t mention he was my first crush and My hero academia was my first anime that i watched

I agree with the comment that says "I don't hate him and I don't like him; He's boring." I finally can name what it was about him that made me don't hate or like him. At first, I thought I should like him because everyone else seems to like him and he's pretty popular, but in the end, he's just really boring. More than half of his fans like him because of his cool quirk and his looks. The sad backstory is a plus for them. Honestly, he was funny in the beginning because of his serious expression and straightforward, innocent commentaries, but he became more and more boring with his personality, role in the story plot, and in my perspective, he's not that good-looking. I don't feel anything for him besides being sad about his story, but he should get over it at some point since his dad was just being a big asshole and didn't know how to be a father. I know because I have the first-hand experience of having a dad like that.