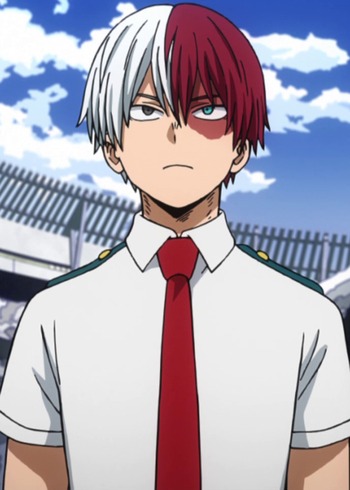 why is everyone saying they love him because hes hot? sure, he is. however he is much more than his looks. he is strong. and i mean hella fucking strong. he has been through physical, verbal, and emotional abuse. look what his father did. abused the poor guy. hit him when he wasnt being good enough. his mother poured boiling water on his fucking eye because of how much he remided her of endeavor. his mom is in a hospital because of all it. his brother was "murdered" when he was a child. he was forced to train and train and was never allowed to have any fun. he is by far the strongest character in this anime. not only that but hes brave. he wouldn't hesitte to save his friends and the people he cared about. infact, anyone at all. he fights and fights every damn day because he has a goal he needs to live up to. he wants to become the number one hero. but most importantly, he wants to become the man his father never was. for the love of god, stop sayin he i overrated. izuku is. bakugo is. kirishima is. but no, all the judgement and hate gets pinned on shoto. fucking acknowledge and appreicate shoto todoroki.

Todoroki and Kirishima are best boys.

i dont see what the big deal over him is. Hes just an emotionless caracter with daddy issues. i admit hes kinda cute but his personality is lacking.